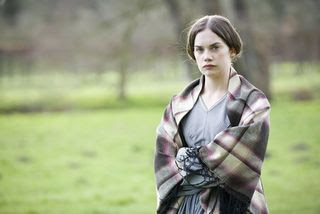 I rose; I dressed myself with care: obliged to be plain- for I had no article of attire that was not made with extreme simplicity- I was still by nature solicitous to be neat. It was not my habit to be disregardful of appearance, or careless of the impression I made; on the contrary, I ever wished to look as well as I could, and to please as my want of beauty would permit. I sometimes regretted that I was not handsomer: I sometimes wished for rosy cheeks, a straight nose, and a small cherry mouth: I desired to be tall, stately, and finely developed in figure; I felt it a misfortune that I was o little, so pale, and had features so irregular and so marked... However, when I brushed my hair very smooth, and put on my black frock - which, Quaker-like as it was, at least had the merit of fitting to a nicety - and adjusted my clean, white tucker, I thought I should do respectably enough to appear before Mrs. Fairfax; and that my new pupil would not at least recoil from me with antipathy. Having opened my chamber window, and seen that I had left all things straight and neat on the toilet-table, I ventured forth."

Posted by MamaBirdEmma at 11:56 PM

Email ThisBlogThis!Share to TwitterShare to FacebookShare to Pinterest
Labels: Media

Thanks for posting this. I adore Jane Eyre. I'm writing it on my calendar now!

I found your blog just in time - I LOVE all adaptations of Jane Eyre!

Thank you for posting this!

So, how did you like the first part? I though it was great! The actress playing Jane is gorgeous!

I liked it for the most part. The previews for the second part seemed a tad more soap-opera-ish than I think Charlotte Bronte would have intended, but it's good overall.

I would liked to see more of Helen's Christian testimony, how she encouraged Jane to forgive those who hurt her. But considering the relative impossibility of covering everything in the entire novel, I can understand that being left out.
(Sorry to be picky, but I am an English literature teacher.) :)

Have you heard that there is a Broadway musical version? I have the soundtrack and really like it!

I have a hard time with book to movie adaptations (and vice versa) too, Leannot. I think that it is sometimes easier to think of them as seperate things entirely.

I wanted to watch the movie "Miss Potter", but it didn't make it to our area... I decided to make do with the book that came from the screenplay and am finding the writing to be terrible! It's a pity!

That is true; whether or not the movie is true to the book, it is still a good story.

And of course, I am going to watch the conclusion next week! ;) I am enjoying it very much.

Emma, despite my best efforts, I still forgot to tape/watch Jane Eyre! I'm so upset with myself. I'll try to catch part two, but I hate to watch things only halfway. Sigh. Maybe they will show it again or it will be out on DVD.

I checked the PBS website and in NY you can catch the first episode on Saturday at 1am or Sunday morning at 4am (both channel 13)... maybe you can set the VCR:) Hope that helps! I think that you'll like it!

I didn't get to see it (to busy with college), but had a family member record Part 1 for me. Can't wait to see it when things calm down a bit!

Emma, you're a doll. Thanks for checking that for me. I'm going to set my VCR TODAY. I think I'll even use a brand new tape. :-)

I'm glad that I could help, Courtney! I hope that you enjoy it as much as I did:)