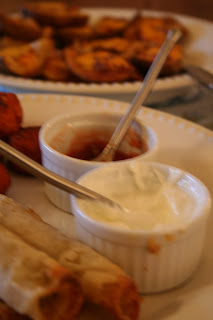 Though I had planned to make Martha Stewart's Pigs in a Blanket and a few other homemade standbys, when I went to the store I found that there was a huge sale on pre-made goodies (TGI Friday brand). As a result, our menu was drastically changed and much more varied... plus, preparation time was virtually non-existent!

Here's what I served:
Not too shabby for ten dollars, huh?!
Posted by MamaBirdEmma at 7:17 PM

Email ThisBlogThis!Share to TwitterShare to FacebookShare to Pinterest
Labels: Kitchen

What a blessing, since I bet your little one keeps you busy lately!