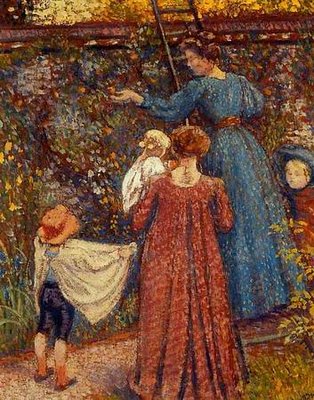 Here is an excerpt from Mireille Guiliano's latest book, French Woman For All Seasons: A Year of Secrets, Recipes, and Pleasure. I found this part of the book to be the more helpful and easy to implement in my life. I have been trying to mindfully follow the 50 Percent Solution each time I eat. I have noticed that I no longer feel stuffed once we leave the table... now, if only I can be this disciplined at our Thanksgiving meal!

"If, as one critic commented on French Women Don't Get Fat, it's "all about portion size" - it's not, really, but if - then change indeed is a tall order. It's generally known that Americans on average eat 10 to 30 percent more than we need to every day. This is not such a surprising result of an increasingly knowledge-based economy, in which jobs of many individuals involve sitting all day. It is simple deductive reasoning to connect this situation with the fact that Americans are also on average 30 percent above their ideal weight. It was a sixteenth century Frenchman, Montaigne, who rightly observed that gluttony is that source of all our infirmities. In the land where there's honor in being able to eat the most hot dogs, what is one to do?

Portion control is more and art than a discipline, one grounded in a useful bit of self-deception. I have written about the power of incrementalism, cutting back portions over weeks and months as you introduce new variety. Though very simple, the method sometimes requires a scale and can be a bit too unstructured for some.

One trick I use to control my intake is to ask myself if I can live with half the amount being offered; indeed, will I be just as happy eating half as much? I put this approach into play in a variety of different ways, from splitting dessert with my husband to counting the number of pieces of bread I eat at a restaurant (Bread is one of my "offenders," a food I'm particularly vulnerable to overeating, and I can mindlessly eat three or four slices if i don't pay attention.) I use this simple alternative regularly, especially when not sure about the "hidden" ingredients of what I've been served or when the portion I've been offered is obviously large. I eat half. Slowly, of course, chewing well. I then ask myself whether I'm content, and therefore whether continuing would be a matter of pleasure or merely routine."

"Often I do continue eating, but I have only half of the half that's left. Then, after pausing, I consider half of what's left again. Edward calls this my Zeno's Paradox of portion control. To paraphrase the ancient principle, if you continue eating only half of what's on your plate each time, you will never eat the whole thing. That's a theoretical explanation. I'm content to call it the 50 Percent Solution and think more practically about why it works. The act of stopping and reflecting slows down consumption, allowing the brain to catch up with the stomach and release the hormone that tells us, "Mmm, that was good, but I've had enough." Contentment is largely a matter of the clock - not how much you ingest but also what you've eaten during a given interval.

If you implement the 50 Percent Solution routinely, your sense of a satisfying portion is bound to shrink. I've been doing ti so long it even works on a banana."

Posted by MamaBirdEmma at 1:48 PM

As you know, I'm reading FWAS, too. I'm really loving it.

Thanks for continuing to inspire us.

Some great thoughts. Thanks for sharing.

Thank you Emma for visiting Sugar's blog and leaving a comment - she'll be so happy! She's so proud to have "a blog of one's own" even though it is really under my control!

And thanks for posting this extract. I think it is an easy trick I can try. And it looks so much more feminine than eating the same great heap of "fodder" that my husband would have on his plate - as we tend to eat identical choices when we are out.

He who thanks but with the lips
Thanks but in part;
The full, the true Thanksgiving
Comes from the heart.
~J.A. Shedd

Have a blessed Thanksgiving!

Wishing you and yours a blessed Thanksgiving! God Bless...

Thanks for writing this bit of encouragement. I could really use it this week... we've been in the boonies of China since May and we unexpectedly had to come to Hong Kong for medical issues and have been indulging in Tony Roma's, order-in pizza, Outback, etc... it's all SO good, but so fattening.

This is a very reasonable question I can ask myself whenever I sit down to eat: can I be content with half this much food?

Thanks- hopefully my waistline will benefit (I'm still trying to lose babyweight from this most recent baby.) Oh, and thanks for linking to my website last week. It's been great to hear from people around the world about raising Godly daughters.

Thank you for all of your inspiring comments ladies! I hope that you all had a wonderful Thanksgiving!