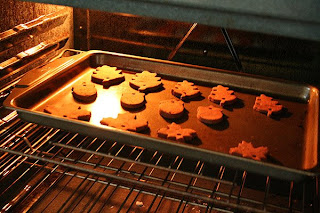 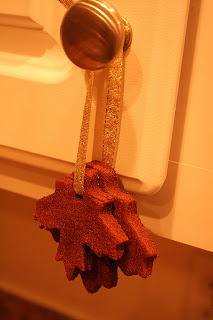 I found instructions for Cinnamon Ornaments in my issue of Martha Stewart Holiday Crafts magazine so my little girlfriend and I decided to try them out this afternoon. They were surprisingly easy to put together (I've had issues with making homemade salt dough ornaments before) though the process takes a long time (between waiting an hour for the dough to sit after its made, making the ornaments, and then baking them for two hours). Our little girl lost interest after they went in the oven, but I expect that she'll be excited when she sees them hanging from the cabinet doors in the morning! The smell is absolutely wonderful! Even the oven smells good hours later!
Posted by MamaBirdEmma at 11:19 AM

Oh, thank you for posting this! I wanted to make these with my daughter this year.

I definitely want to try this!

I love these- I am definitely going to try it out- SOON :)

I've made these to hang on the Christmas tree before but I love the door knob idea! Thanks.

oh! we made these a few years ago, and i completely forgot about them! thanks for reminding me about a great craft! the grandmas and aunties loved hanging these in their cars. i'll tack on to our "to do" list. thanks!

This looks like fun, we usually do the cookie clay ornaments but the scent of cinnamon is making me want to try these right now! :) Hope you're having a wonderful fall...

I made these too, but you have WAY cuter cookie cutters! ;)

greetings from the netherlands!