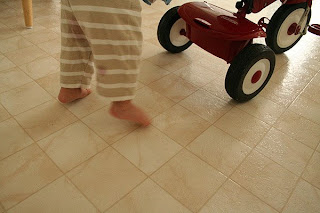 Little Man turned ten months old on Sunday and in honor of this, here are ten things about him:
1. He can stand and most recently learned to walk if he is holding on to his sister tricycle (see photo).
2. He cries and whines a lot more than his sister ever did.
3. He smiles and laughs a lot more than his sister ever did.
4. He likes to be held.
5. He does not like it if you eat in front of him without offering him a bite... it doesn't matter one bit if he *just* ate!
6. He has eaten dirt a lot more than I care to admit.
7. He love, love, loves his father! He will literally push me away if Papa enters the room and crawl at warp speed over to him. It's particularly cute when we are at church and he tries to do this:)
8. He likes to wrestle his stuffed caterpillar.
9. He uses a pacifier.
10. He has no teeth yet!
Posted by MamaBirdEmma at 6:51 AM

My baby is nearly a year, but at ten months started walking by hanging on to the back of that same tricycle! It seems to work better than most push toys because it's heavy. I just had to follow him around and nudge the handlebars to "steer" him. :)

wow!! How exciting! I can't believe that Ben should be ever so slightly older than him!! LOL...Ben is just 8.5 months! Ben is climbing steps an cruising on the furniture, but not quite walking yet...and that is just fine to me...he is already far too mobile LOL

Happy 10 Months, Little Guy! He sounds like such a sweetie.

How the time has flown! Give him a squeeze for us!

They are so fun at that age! Enjoy your little guy. :)

Look at his cute little feet, he's such a cutie! No teeth, eh? My kids were both early teethers, so I have no experience there.

Wow, happy ten months day! My little sister is seven months, and she has three teeth, but she hasn't made any attempt at crawling or scooting around yet! It just shows how much each baby is an individual - they're all so different and it's so much fun watching their unique personalities develop.