An Explanation of the Orthodox Three-Bar Cross... 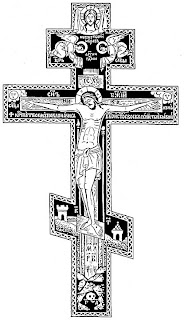 By Fr. Theodore Jurewicz
The Top Bar - The Explanation:
The top bar is the title-board, which Pilate ordered to be hung in mockery over Christ’s head on the Cross. On this board was inscribed: "Jesus of Nazareth, King of the Jews" in Hebrew, Greek, and Latin (abbreviated to the Greek initials ‘INBI’ or the Latin initials ‘INRI’ in the Western tradition). This is replaced with the Christian inscription: "King of Glory" – below the knees of the angels. On the title-board is inscribed the initials 'IC XC', being the first and last letters of Christ’s name in Greek. In addition, just above Christ's arms we see the inscription: ‘NIKA’, which in Greek means: "He conquers" or "He is victorious." Frequently, we see these last two inscriptions together: 'IC XC NIKA', meaning: "Jesus Christ is victorious" (over death and sin).

The Middle Bar - The Explanation:
The middle bar is that on which the Lord's hands were nailed. On either top corner we see the depiction of the sun (left) and the moon (right), for "The sun hid its light, and the moon turned to blood." (Joel 2:31) The inscription: "Son of God" is placed on both sides of Christ's head, and below His arms we read the inscription: "Before Thy Cross we bow down, O Master, and Thy holy Resurrection, we glorify". The halo of Christ is inscribed with three Greek letters meaning "The Being" or "He Who Is", to remind us that Christ is the same God Who identified Himself with those words to Moses in the Old Law.

The Bottom Bar - The Explanation:
The slanted bottom bar is the footrest. There is some question of whether it was actually on the Cross of Christ, but it is acknowledged to be a necessary attribute of the Cross, worthy of veneration and prophetically alluded to in the words [Let us] worship the footstool of His feet... (Ps. 98:5). In prayers for the Ninth Hour, the Church likens the Cross to a type of balance of righteousness: "Between two thieves Thy Cross did prove to be a balance of righteousness: wherefore one of them was dragged down to Hades by the weight of his blasphemy whereas the other was lightened of his transgressions unto the comprehension of theology. O Christ God, glory to Thee." The meaning of this prayer is as follows: the Cross of Christ stood for a scale of justice between the two thieves: for one of them sank in to hell, dragged down by his blasphemous words; and the other, the wise thief, ascended into heaven, because of his repentance. The church fathers attempted to render tangible the thought of the unfaithful thief going to hell for his blasphemy through the just judgment of God (the lower end of the bar), and of the wise thief going to heaven for his repentance and his praise of God (the upper end).

The Images - The Explanation:
On the Cross is our Savior, Jesus Christ. Note that He does not wear a crown of thorns, and that His feet are nailed with two nails. Behind the body of Christ, on either side, are a lance (which pierced Him) and a sponge (which was soaked with gall and offered to Christ to drink) on a pole made of reed or cane. On the body of Christ is depicted blood and water flowing forth from His side. Below the feet of Christ is four Slavonic letters meaning: "The place of the skull became Paradise". Hidden in a cave under the earth is 'the skull of Adam'. We are thus reminded that Adam our forefather lost Paradise through the tree from which he wrongly partook; Christ is the new Adam, bringing us Salvation and Paradise through the tree of the Cross. The city of Jerusalem is depicted in the background, for He was crucified outside the city wall.
Posted by MamaBirdEmma at 3:37 PM

Very interesting - thanks for sharing.

Blessed Feast of the Holy Cross!