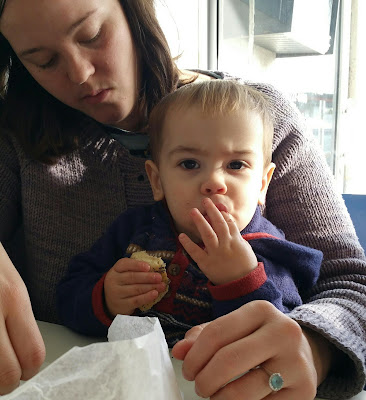 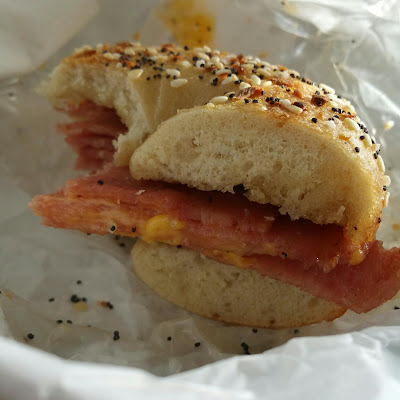 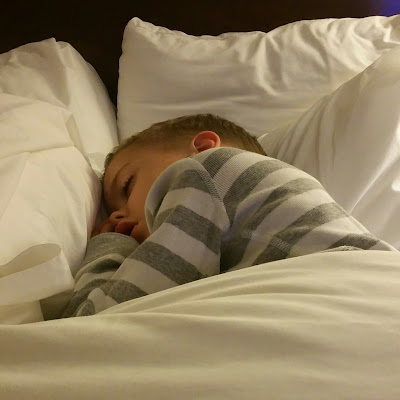 And when we give each other Christmas gifts in His name, let us remember that He has given us the sun and the moon and the stars, and the earth with its forests and mountains and oceans - and all that lives and moves upon them.  He has given us all green things and everything that blossoms and bears fruit and all that we quarrel about and all that we have misused - and to save us from our foolishness, from all our sins, He came down to earth and gave us Himself."
Sigrid Undset

Our fourth day of Christmas started out so well with a trip to the bagel store for breakfast with Grandfather Bear and some of the aunties and cousins.  I had my usual:  an everything bagel with pork roll and cheese.  If you are not from New Jersey, you probably don't know what pork roll is, but it is so yummy.

We had a few little errands to run before leaving for a family Christmas party in Brooklyn, but while we were out and about, Button started feeling hot and sick.  Within an hour, it was pretty clear that we weren't going to be going to the party.  It was really disappointing, but as the day has worn on, he has gotten worse.  I'm glad that we didn't risk getting other people sick at the party.  He's still burning up, but after sleeping nearly seven hours during the day, he is now watching a little television while I type this.

Father John's grandmother is not doing too well, so we drove up to her area to see if he could see her before we come home on Wednesday.  We left Grandfather Bear's ahead of a winter storm  and are ensconced in a hotel while we wait out this virus (and hope that no one else falls sick).  We'll see what the weather does overnight, but it sounds like there will be at least a little snow when we wake up.  God willing, at least one or two of us will be able to give Baba our love tomorrow.
Posted by MamaBirdEmma at 9:16 PM

Thank you for catching that! It's actually four colly birds!

Your blog is very impressive and have the useful information it is really caught my attention.
tattoo thoughts