The Significance of Liturgical Colors... 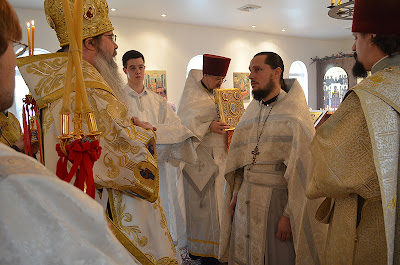 What is the significance of liturgical colors?

Anyone who has at least once attended an Orthodox service, has most likely noticed the beauty and festivity of the vestments. The diversity of colors is an inalienable part of the liturgical-church symbolism, a way of affecting those praying. Bright and radiant vestments convey the joy and exultation of God’s beauty and greatness, while dark vestments instill within us a sense of repentance and the need to return to God.
Since ancient times, the liturgical books have offered flexibility in liturgical color, only specifying whether the vestments worn for a particular feast or season should be light or dark. This has led to various local practices over the years. In the contemporary practice common to many parishes of the Orthodox Church in America, there are six basic color groups.

WHITE is used for Pascha, Nativity, Theophany, Ascension, and Transfiguration.

PURPLE is used for Great Lent (in some places black is used for Clean Week and Holy
Week).

BLUE for feasts of the Mother of God.

RED for feasts of the Holy Cross , St. John the Baptist, martyrs, and for every day of the Nativity Fast, Apostles' Fast and Dormition Fast (except during one of the Great Feasts of the Lord or Theotokos).

GOLD is used when no other color is called for as it conveys the riches and glory of God’s Kingdom.

The color of the feast is worn from the vigil the night before the feastday until the leave-taking of the feast, the final day of the festal season. The length of these post-feasts vary, and are given in the liturgical calendar and rubrics. Generally speaking, there is a post-feast of about a week for each of the twelve major feasts.
Finally, special services like funerals, marriages, and baptisms are usually served either in white, gold, or the color of the lenten or festal season.
Posted by MamaBirdEmma at 8:58 PM