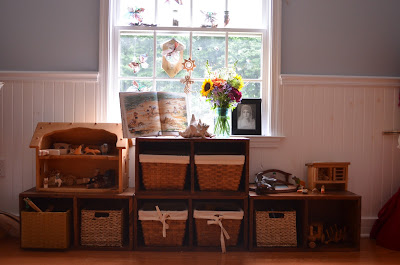 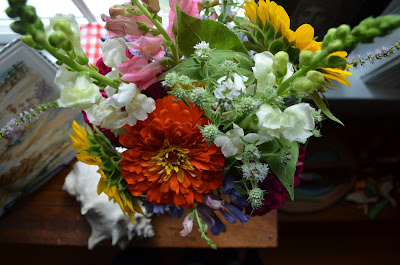 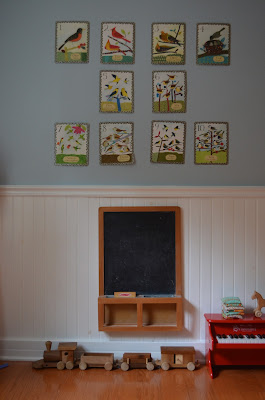 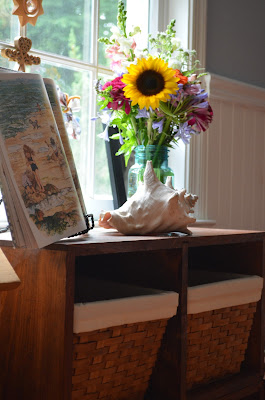 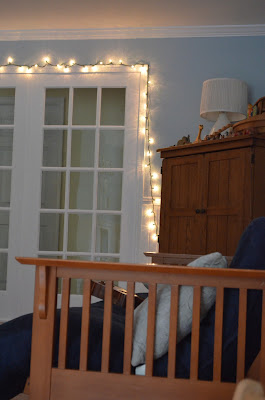 The rain is raining all around,
It falls on field and tree,
It rains on the umbrellas here,
And on the ships at sea.

It has been a rainy week and so we've spent more time in our playroom that usual for this time of year.  We finally hung up the little chalkboard I've had leaning against the wall since we moved in (19 months ago already!).  I was tired of worrying that it would fall down and smash.  I have quite a stack of other things to hang, but I think that they will have to wait since we've just discovered that the leak in the church we thought that we had fixed at the end of Great Lent actually isn't.  That's a large project for Father John and he's falling behind significantly in his other work (which I thank God for, since it means that his business is doing well!).

It's hard to believe, but I've started to think about the books and materials that I need to get for September (we'll be doing kindergarten and second grade this year) and how to organize things a bit for that.  I'm beginning to think that we'll really have to have more of a plan for our days so that we can fit everything in for both children, while leaving room for the attention our energetic three-year-old is sure to demand.

I really hope to have space to make plans to do things out an about one morning...  it's quiet at the zoo and library before little ones are let out from school each day.  I do have to say though that I'm really seeing the benefit of being home more often than out.  I'm feeling the urge to read Simplicity Parenting again to try to apply some of the tricks of the trade that I used when the older two children were smaller.  I'm really feeling the need to cut down on going out with the children, take the media exposure down a notch, and implement some quiet time each day.

It's nice to have these rainy days to work some of these things out in my head.  A lot of it just has to do with me being able to keep the resolutions that I have for our family without letting a rough night or laziness get in the way.  What are you thinking about these days?  How do you keep yourself on track when you're trying to make some changes in your lifestyle?
Posted by MamaBirdEmma at 5:48 PM

I just love your playroom! I'm so inspired by it. Ours needs a major overhaul.

I end up staying at home with my kids a lot, more out of necessity (baby's nap schedule, difficulty getting 4 kids out of the house, etc.) than anything else. It's rather nice, I don't really miss rushing around, and all of the "drive thru" spending that usually accompanies it due to the poor meal planning that usually comes with spontaneity.

oops, sorry for that repetitive last sentence and the poor editing! I was talking to my kiddo while writing it-- ha!

Oh, we could have some good conversations about this! I struggle with it too. Our oldest is starting to need more time with kids his own age, but we have to balance that with the needs of three other small children!

it's really hard to change patterns; the changes you want to implement sound wise.

one of the ways I tried to keep myself doing things well was not having the thing in the house that I did not want to do (like TV or a junk food)... it's a challenge and I often fail at my goals but I think then the thing is to not give up and not despair.

I actually just took a trip with baby N (11 weeks) to visit my family and being away for a little family trip helped feel more refreshed and energetic to accomplish some long awaited tasks. For example this week's goal is to plan out meals for dinner and buy the produce ahead of time. A goal already accomplished is falling asleep in our crib (instead of on parent) AND WITHOUT a pacifier. I am quite excited by this!

What a beautiful playroom! It could be in a magazine!

I hope you find this inspiring!!

Also this one. I find life to buys and some moms just whirl me dizzy with their running around schedule!!