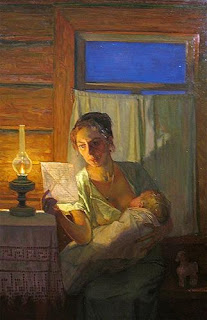 It is hard to believe that it has already been a whole month since our baby was born. He has already become such a huge part of our lives, I can barely remember life without him. While the time he spent at the hospital was really very difficult, it is already a fading memory (as many of you predicted it would be!). Here are twelve things that you should know about our baby:

3. He has blonde hair and dark blue eyes.

4. He has outgrown his preemie clothes as far as length goes. He only wore them for a few days!

6. He has to go for weekly weigh-ins (like he's a teeny-tiny wrestler!).

7. After eating he falls asleep immediately, but grunts and groans in his sleep for 15 minutes to a half hour. It's cute in the daytime and a little aggravating at night since he sleeps next to me in a co-sleeper.

8. I can usually "silence" him by rubbing his belly for a little bit.

9. He loves to sleep in the swing and cries when it stops.

10. He is just starting to have awake times... though they are few and far between and only for short periods.

11. We bought an Angel Care Baby Monitor for his bed before we brought him home from the hospital. He has only set it off once by sliding off of his sleep positioner. That was an extremely scary moment!

12. His big sister loves to come in and peek at him and say "hi!" It is video camera worthy!
Posted by MamaBirdEmma at 10:26 PM

I am delighted to hear he is doing so well and that you can relax into motherhood!

Thanks for the update! I'm especially excited about his great weight gain. Glad things are going so well.

I'm so glad that he is doing so well. Keep us updated as to how he is doing.

A month already, wow! Keep growing so healthy, little one! I love reading about his progress!

I am so happy to hear that your little one is doing so well! He sounds like such a sweet baby!

Ack! I got him a preemie outfit! Apparently I should have gone 0-3 months! I am glad to hear he is growing so well...

Quick question, if a baby stops breathing due to SIDS but does not struggle (I don't know if it they always struggle or not) will the monitor go off? Of course for every mother, SIDS is a very real concern. I was wondering if this is the solution to that problem.

The monitor will go off if the baby stops breathing. The way that it works is that if the child doesn't move (all babies move when they breathe) for 30 seconds it will go off. Hope that helps!