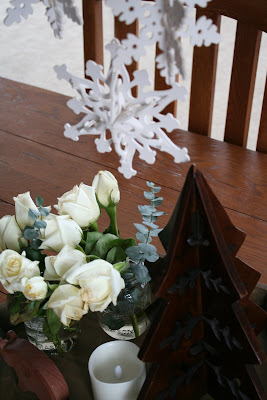 The young people had put things in apple-pie order as far as they had gone. A fire was laid in the big stone fireplace, all ready for touching off, and gave a homelike, cleared-up look to the whole place as if it were getting ready for some event. On each side of the chimney stood a simple set of bookshelves filled with well-worn volumes that ha a look of being beloved and in daily intimate association with the family. On the top of the shelves Carol had placed some bits of bric-a-brac, and in the center of each a tall vase. Beside them were a few photographs in simple frames, a strong faced man with eyes that reminded one of Shirley and a brow like George's; a delicate-featured, refined woman with sweet, sensitive mouth and eye's like Carol's; a lovely little child with a cloud of fair curls.

The old couch was at one side of the fireplace, as a convenient angle to watch the firelight, and yet not hiding the bookshelves. On the other side, with its back toward the first landing of the rude staircase, stood an old upright piano with a pile of shabby music on the top and a book of songs open on the rack. On the floor in the space between was spread a worn and faded ingrain rug, its original colors and pattern long since blended into neutral grays and browns, which strangely harmonized with the rustic surroundings. A few comfortable but shabby chairs were scattered about in a homelike way, and a few pictures in plain frames were hung on the clean new partitions. Under one stood a small oak desk and a few writing materials. A little further on a plain library table held a few magazines and papers and a cherished book or two."