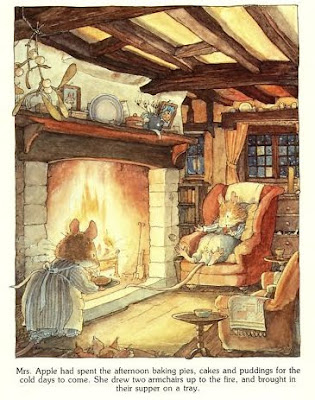 Deep in the dark roots of Brambly Hedge tiny lights appeared as lamps were lit in the windows. More little lights could be seen leaving the Store Stump, moving hastily along the hedgerow, and disappearing into holes hidden in the twisty roots. The mice had smelled snow in the air, and were all hurrying home to a nice hot supper by the fire.

Mr Apple, warden of Store Stump, was the last to leave for home. By the time he reached Crabapple Cottage, the first flakes were beginning to fall.

"Is that you dear?" called Mrs. Apple as he left himself in through the front door. Delicious smells wafted down from the kitchen. Mrs. Apple had spent the afternoon baking pies, cakes, and pudding for the cold days to come. She drew two armchairs up to the fire, and brought in their supper on a tray."

Woman of the House said...

Such a sweet story! I'm a sucker for animals, especially mice, in clothes. My daughter has the very illustration you included on a mini-cup and saucer and plate that was given to her by friends of ours on her first birthday. So sweet!

I just love Brambly Hedge...need to find some for my daughters

Darling...I put that book on hold at our local library...and can't wait to see more of it, reminds me a bit of Beatrix Potter.