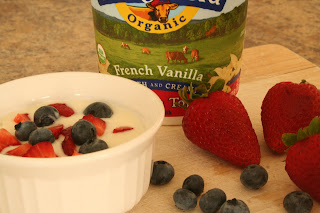 On Saturdays in summer when I was a child, my mother would serve us a cold lunch on the shaded terrace overlooking the garden. The day would have started and ended, as it still does, with a tall glass of water. She took pains to be sure that we were never dehydrated; there would be a full pitcher, frequently refilled, all day long. Mother would bring a baguette. a couple of cheeses, some salami or ham, while I, with a visiting friend or two would go to the garden to pluck a few tomatoes, some radishes, and some fresh lettuce (we would rinse our pickings at the garden tap, never stepping foot in the house). That labor was rewarded later with free, exclusive access to the berry bushes; after eating our sandwiches, slowly of course, there was a digestive pause, and then we were each handed a bowl with which to forage. It's as if my mother knew we would otherwise just crouch there putting berries into our mouths without a thought for the others waiting at the table. We did, however. manage to make it back with bowlfuls for them, too. Afterward, we'd just sit and talk lazily til mid afternoon. Even with the doors and windows arranged for a cross breeze, it was simply too hot at midday to sit indoors,much less exert oneself outside. Evenings were when we played, and on the longest days it would be light out until ten.

We were left to our own devices in the big garden. Mid-afternoon, one of our neighbors, Madame Regnaud, would often come with a new children's nook she was reading to her grandchildren, and she would read us a story or two in the shade of the terrace; with our eyes shut we could hear nothing but her voice over the happy chatter of the birds. Mamie would reappear around le 4 heures for the afternoon refreshment, not a gouter (snack) but a glass of lemonade she had made fresh, mindful of our need for water, especially in summer. It was neither tart nor especially sweet."

from French Woman for All Seasons: A Year of Secrets, Recipes, and Pleasures
By Mireille Guiliano

Posted by MamaBirdEmma at 11:11 PM

Oh those French know how to live!

How funny! When I began reading this post, I thought it was you who was talking and I kept wondering, where the heck does she live? It sounded so Euro...Well, duh, it was a French author. ha!