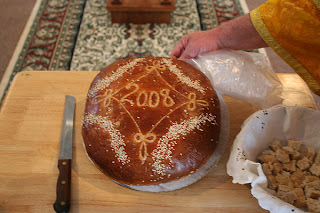 In our church, we always have bread in honor of Saint Basil... Though his feast day isn't until January first, we celebrated it today.

Here is a brief article on the tradition:

One of the most beautiful and inspiring traditions and customs of the Greek Orthodox Church is the observance of Vasilopita. It is this annual family observance, together with many other traditions of our Church, which joins our Orthodox Faith and heritage with the history of the Christian religion itself.

The word Vasilopita is a compound Greek word which means the sweet 'bread of Basil'.

This age old tradition commenced in the fourth century, when Saint Basil the Great, who was a bishop, wanted to distribute money to the poor in his Diocese. He commissioned some women to bake sweetened bread, in which he arranged to place gold coins. Thus the families in cutting the bread to nourish themselves, were pleasantly surprised to find the coins.

This original event which happened in Cappadocia of Caesarea in the last half of the fourth century, is very much alive in our Orthodox homes each year on January 1st.

According to tradition, special sweet bread (in some areas of Greece, it takes the form of a cake) is prepared both in the Orthodox homes and in the Church community which is called Vasilopita. Sweets are added to the bread which symbolize the sweetness and joy of life everlasting. It also symbolizes the hope that the New Year will be filled with the sweetness of life, liberty, health, and happiness for all who participate in the Vasilopita Observance. When the Vasilopita is prepared, a coin is usally added to the ingredients. When the bread is cut and the observance begins, the individual who receives that portion of the Pita which contains the coin is considered blessed.

This tradition adds joy to the celebration at the beginning of the New Year, which everyone hopes will bring joy to all. Many Orthodox Christians enjoy the Vasilopita at home with their loved ones during the New Year celebration. The head of the family cuts the pieces of pita for all members of the family. Since Saint Basil loved the poor people, a special piece is cut for the unfortunate of the world, which symbolizes our concern for the poverty-striken people of all nations.

During the fourth century, one of the greatest Fathers of the Christian Church appeared on the spiritual horizon of the Orthodox Faith. His name was Basil and he was Bishop of Caesarea, Cappadocia (Asia Minor). He was born four years after the First Ecumenical Council held in the year 325 A.D. Saint Basil was one of the three Cappadocian Fathers of the Church (the others were Gregory of Nazianzus, his best friend, and his brother, Gregory of Nyssa).

Saint Basil was the first person in human history to establish an orphanage for little children. He also founded the first Christian hospital in the world. His fame as a Holy Man spread like wildfire throughout the Byzantine world. He was considered one of the most wise and compassionate clergymen in the entire history of the Church. His Feast Day is observed on January 1st, the beginning of the New Year and the Epiphany season. The Church, therefore, in respect for his many contributions to the Church and to mankind in general, combined the joy and happiness of the New Year with the glory of the birth of Christ, and the Epiphany into what is known in the Orthodox Church as the Vasilopita Observance.

The Vasilopita is a joyous observance, and it is a custom which should not be neglected by Greek Orthodox Christians in the Western world. It should be retained annually in the home and in the parish. It is a wonderful way to begin each New Year which God has given to the world. If you have been holding the observance in your home, congratulations! Please continue to do so. If you have not, hopefully this information has explained to you how to do it. We urge you to begin this year and make it a "family gathering" every year on Saint Basil's Day/New Year's Day, the 8th day of Christmas.

Posted by MamaBirdEmma at 12:27 PM

Did you get the coin? It's lovely!

No, I didn't... A sweet little girl got it:) She's had a rough year and we're so happy that she got the blessing!

Thanks for sharing this