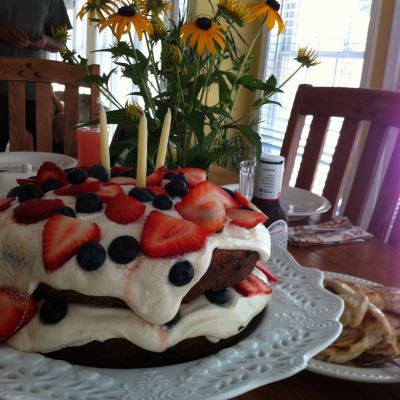 For Sugar Plum's namesday dessert, I attempted my first layer cake!   It wasn't as traumatic as I expected it to be!  I am not a fancy cake baker at all, but was encouraged by my friend Kelly to give it a whirl.  I chose Martha Stewart's Versatile Vanilla Cake recipe.  Unfortunately, I baked the cakes a little too long (I keep forgetting that the oven in this house runs a bit hotter than our last house!), but the flavor of the cake was very good!  I will definitely be using this recipe again (and watching it a bit better!!).

I thought that the icing that I chose to frost the cake with was a bit too sweet (I did a basic vanilla frosting).  It seemed like the cake would have bit a bit better with whipped cream as the icing instead of a sugary frosting.  I really liked the blueberries and strawberries, though!  I decided to try to ice and decorate the cake a bit like I've seen Alica Paulsen do on Posie Gets Cozy.  I think that it would be fun to try making this cake with a vanilla pudding center and whipped cream on top...  too crazy?!


What new thing have you tried doing lately?
Posted by MamaBirdEmma at 8:02 AM

Email ThisBlogThis!Share to TwitterShare to FacebookShare to Pinterest
Labels: Kitchen

Whipped cream is my favorite frosting and filling. I like to bake two vanilla layers, slice each of them in half horizontally, put a little jam (usually raspberry, maybe mixed with a tiny bit of liqueur :) ) on the bottom side of each, then a thin layer of whipped cream; then mix the rest of the jam with fruit (like raspberries), put it in the middle, and put more whipped cream over it. Up to this point, you can refrigerate it until serving. Then at serving time, let the cake warm up a little (so it isn't too chilly) and then spread the rest of the whipped cream over it like frosting. A few raspberries strategically placed on the top -- lovely! And delicious!!

I'm really enjoying reading your blog, and I want to put in a request that might make it easier to use your blog. Would you consider adding a "search this blog" feature? It's not too hard to add, for mine I think I cut and pasted the html code from this page: http://www.way2blogging.org/2011/05/add-simple-search-box-widget-to-blogger.html

but I'm not sure, the first one I tried didn't work so I tried a few different ones I found online.
I know you label the festal learning baskets, but it would be easier to search by the saint, then I could prepare/anticipate the day a little better. I really appreciate the the ideas you've collected and shared and I would like my kids to build relationships with the saints through experiences they can relate to. My husband forwarded the entry on St John to his dad who is a priest and he really enjoyed the picture and accounts about St John's pigeon.

If you choose not to add the gadget I completely understand, there's no pressure, I just wanted to suggest it.
Thank you,
XeniaChristi

Also, I saw that years ago you started using burt's bees radiance line which I also found a couple years ago for myself. I don't know if you still use it or if you've changed, but they recently added a fragrance and my face burns and eyes water now so I'm in the market for a new lotion, I was wondering if you had any suggestions from your experience, sorry for the long comment, I've been thinking about these things for a while. thanks again

I haven't tried this yet but I really want to. You take an angel food cake and split it horizontally into three layers. Mix a package of cream cheese with a jar of lemon curd and spread it in between the layers and on top. Add berries in season. It looks very much like your cake. (post: http://homeiswheretheboatis.wordpress.com/2012/06/14/berry-quick-easy-layered-cake-2/)

Have you tried the blogger search feature at the very top left of my blog? I often search things on blogs using that. Maybe a new search feature would work better?

I still do use the radiance line from Burt's Bees occasionally, but one of my favorite moisturizers in Eucerin.

oh thank you, I'm just not that savy about this cyber world, that was very helpful