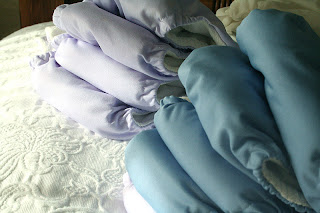 We bought a bunch of Fuzzi Bunz diapers about two and half years ago but had to stop using them about six months in because they began to stink like ammonia. I tried everything I could think of to strip the stink away. I would put them away for a month or two hoping that the smell would go away, but no such luck. As a last ditch effort to save these diapers, I asked what to do on a forum I frequent and someone suggested washing them with vinegar. I tried it and we are back in business!! I am so happy that we didn't have to toss these diapers! It is also nice to be using them on my two little ones again... I like seeing them waddling around with their fat little bottoms!
Posted by MamaBirdEmma at 7:50 AM

Lol...I love fluffy bums too! I was thinking about doing a post on our adventures in CDing too... Glad you're back in business!

I do love these diapers. Gregory has many in the same shades that you pictured. After I had my 20 week sonogram and found out this little one is a girl it was funny that one of my first happy thoughts was that of pink fuzzi bunz. They are adorable.

I have a sanitary wash cycle on our washing machine and have been able to keep them fresh just using regular detergent. That's good to know about the vinegar though. Those tricks of the trade are helpful.

Do they really work well? No leaks? How many do you need to have on hand at $18 a piece?

I bleach each load of mine. I know that's not great for the enviromnet but I don't think one or two blech loads every other day is going to do too much enviromental damage.

All of mine ar ebrightly colored and the bleach hasn't affected that one bit.

Whohoooooo! We used cloth with our littlest one (who will be a teenager next week, so littlest isn't so descriptive) but I just used the plastic pants.

We cloth diaper, too, and we had a similar problem. Now I use white vinegar as my fabric softener (we used to not use anything, because my daughter and I are both allergic to scented softeners.) The vinegar works great, and no skin irritation!

Maria, be careful using bleach on FBs. If you must, it's fine for the inserts but can shorten the life of the actual diaper. Vinegar is just as effective and the occasional drop or two of tea tree oil is good too!

I have Bum genious, but I have noticed that after about 9 months now the inserts are needing to be replaced.

my youngest is now potty trained (woohoo) but what i did (and we do not have that great of a washing machine) is I bought one of those downy balls (that you use for fabric softener) and I would fill that about 3/4 full of vinegar, pull the plug on it, and throw it in the washer along with the diapers and wraps. it "magically" releases the vinegar at the right cycle. kept our diapers fresh smelling (and these diapers and wraps were mostly hand me downs from friends so they had seen quite a bit of use). Also, the best thing to keep your diapers white is to hang them outside in the sun- not always an option when you live in the glorious pacific northwest where it rains a lot- but I was always happy to wake up to a sunny day and quickly run a load of diapers and hang them to dry outside:)

This is good to know. My daughter's cloth diapers are starting to have an unpleasant aroma. I would LOVE fuzzibunz, but I just can't do the price. Instead, I use the tri-fold diapers (the ones that are prefolded and sewn) and add a washcloth (designated for the sole purpose of being a diaper-washcloth) as an added layer of absorbancy. They're pinned on and vinyl panties keep them leak proof. For nights and long trips I use disposables.