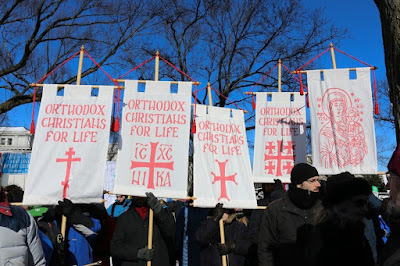 I wrote the following on Facebook last night, explaining why I did not march with the Women's March on Washington on Saturday and why I hope to attend the March for Life later this month.

There are many good reasons that people have for wanting to march and demonstrate, but I think that the only thing to keep in mind is to be sure that the cause that you are marching for is in line with (Orthodox) Christian teaching (and is, of course, non-violent). In the case of the Women's March, I felt that I could not support or attend an event that was expressly pro-choice. There were many good people there who had good intentions and it is not my place to judge them. Perhaps it is time to redouble our efforts to encourage our daughters and sons (both physical and spiritual) to use the gifts that God has given them well, practice Christian virtues and sexual morality, and help instill upon them the courage and strength to stand up for those being mistreated. The effect of children raised in a Christian home will have a more lasting impression on society than a day or two of demonstrating and marching... Meeting President Trump's vulgarity with the vulgarity of pussy hats, foul language, and the glorification of abortion won't.

(The above photograph is from the Orthodox March for Life Facebook page)
Posted by MamaBirdEmma at 9:10 PM

I applaude you and your family!

What you said about "raising our children in a Christian home, will have a lasting impression, then a day or two demonstrating.", so true!!

We walked/ marched last Saturday, in the Boise, March For Life.

So well said, you've summed up my feelings exactly. This "we want everyone who cares about women involved!!!!!! ......Oh wait, except you." attitude is so sad.