Getting Worse Before It Gets Better... 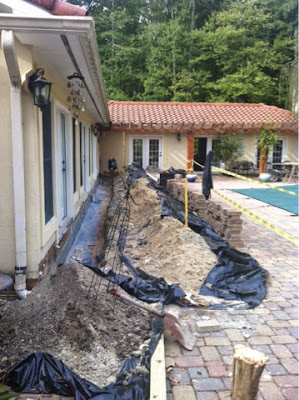 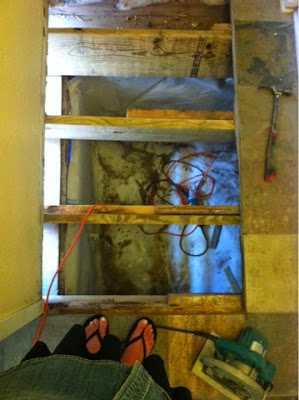 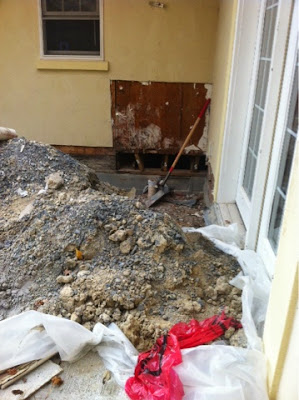 One night, late last winter, Father John and I were startled from a deep sleep by the sound of scurrying little feet under the house.  Once daylight came, we called an exterminator and he discovered that there were rodents making their home in the crawl space under the house and church hall.  He also discovered that there was significant water damage and mold growing under there.  The previous owner put in an amazing pool and patio, but didn't address the pressing concern of drainage...  and now our church has to.

Thankfully, the critters have been evacuated and the mold has been found not be dangerous.  Last week, Miguel and Javier (or as Button calls them:  Mister Gell and Mister Smiley-Face) began excavating the patio to begin the 6 - 8 week process of repairing the damage and making it drain properly.    They finished up the house-side digging and found that part of the floor in the sun room is so badly damaged that it will need to be replaced.

We're on week two of the work and today the guys ripped up the floor in the sun room.  I'm hoping that will be finished by the end of the week.  There was a ton of dust blown around the house (despite the large tarp they used to seal it off), so I've been cleaning up this afternoon.  Hopefully that will not be in vain!  In a couple of weeks, they'll get started on the church hall side (the patio is surrounded on three sides by the church, rectory, and hall).

P.S.  It was hysterical this morning during lessons when Sugar Plum was sawing away on her violin and Miguel was banging, and pounding away at the tile...  what an enormous racket!
Posted by MamaBirdEmma at 6:34 PM

Bless you:) You have such patience.

oh boy! that is a lot of work! there's always something hey? Sorry for the dust! I do hope it will be FULLY better!!! mold and poor drainage is no fun! Sounds like NJ new construction, sigh :(

I hope the project is done soon! We are in the middle of a small remodel here. The painting is done and next the toilets and floors are being replaced in the upstairs bathrooms (kids and master). My husband's office in right off of the master bath, so now all of his office stuff is in boxes in our bedroom. I am ready for them to be out! :)