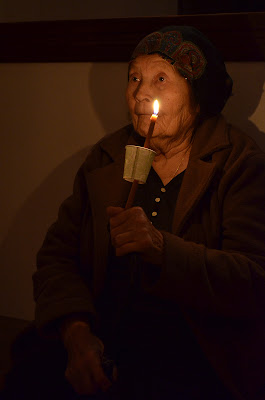 Question: Is there a dress code in the Orthodox Church, and if so, why?
Answer: First, it should be said, that it is a recent phenomenon in some Roman Catholic and Protestant churches to advertise “casual”, “relaxed” or even no dress code at all for worship and fellowship. This answer will not directly critique this practice other than to say that this has never been part of and is a clear departure from Orthodox Christian tradition.
Both the Old and New Testaments are full of calls to modesty and respectfulness not only in inward spirit but also in outward appearance as the one is connected to and influences the other. Since the time of Adam and Eve, who covered themselves with clothing after the Fall, the way in which one dressed has been directly connected to the way in which one relates to God and one’s neighbor. Cleanliness, simplicity, appropriateness, humility, etc., are not only virtues of the soul but also virtues of the body, which, St. Paul tells us, is the temple of the Holy Spirit.

Question: What’s the dress code?
Answer:  The Scriptures offer us a dress code, with not only calls to the aforementioned virtuous principles, but also specific details in relation to: cross-dressing (Deut. 22:5), body markings (Deut. 14:1, Lev. 19:28), braided hair and gold or pearls or costly attire (1 Tim. 2:9, 1 Pet. 3:3-4), and head coverings (1 Cor. 11) to name a few.
Now to be sure each of these references has nuances related to culture and epoch; for example men wear kilts in Scotland. Yet, just as it would be incorrect to overlook these nuances, so too would be incorrect to be dismissive of the teaching itself. Therefore, throughout the Orthodox world, the Scriptural teaching remains the ideal or standard, yet the application remains pastorally flexible in order to bring about spiritual growth and progress in the faithful. For this reason, one will observe both strict adherence to the dress code such as in monasteries or parishes whose faithful are from traditionally Orthodox cultures, as well as appropriate flexibility in churches who pastorally care for and missionize non-Orthodox societies. In general, it is a good idea to be aware of the dress code, and not only refrain from being critical of it but also to respectfully follow it because it has salvific import for us and others.

Question: What is the dress code at our Mission?
Answer:  There are four basic categories: 1) men, 2) women, 3) children, and 4) everyone.
1) Men should not wear hats, bandanas, shorts, sleeveless shirts, or casual footwear like sneakers.
2) Women should not wear miniskirts, spandex-tight clothing, low-cut or revealing tops (unless covered with a sweater or other garment), or casual footwear like sneakers.
3) Children should be given a little more flexibility but should still wear “church clothes” so that they know they are somewhere that is special and holy.
4) Everyone should refrain from clothing that is immodest, ostentatious, a fashion-statement, or otherwise distracting from the prayerful and sacred space of the Lord’s House. Clothing or bodily adornments with images, symbols, or writing should not be worn or at least covered up, so that the holy icons and Word of God do not have to compete with the logo of our favorite sport team, the name of a music band, or the slogan of our political party.
This being said, we should not take it upon ourselves to enforce the dress code upon anyone else, especially visitors to the Mission. As people become familiar with Orthodox Christianity, they will slowly start to adapt themselves to the ways of the Church, naturally growing in Christ with that which pertains to both soul and body. If you have questions or concerns, please speak with your parish priest.

Posted by MamaBirdEmma at 7:41 AM

Our parish has a huge variety of dressing. On any given Sunday, we may have some very fancy dressers to very casual jeans and t-shirt type outfits.

Our priest also recommends not wearing shirts with huge logos or pictures.

I love this. Our church asks people to dress in their "Sunday best" and to dress modestly but doesn't enforce it :( I think a lot of ppl have different ideas of what is modest and what isn't, too. My girls have asked a couple of times if girls they saw were in their bathing suits!!

Where we go to church, women are asked to wear skirts or dresses, not pants.

But other things seem to depend on the parish. One parish priest said no flip flops. At another parish, they all wear flip flops.

I think the bottom line is that we don't want to distract ourselves or anyone else from the service, and to remember that we are in the presence of the King of Kings.

Where we go to church, women are asked to wear skirts or dresses, not pants.

But other things seem to depend on the parish. One parish priest said no flip flops. At another parish, they all wear flip flops.

I think the bottom line is that we don't want to distract ourselves or anyone else from the service, and to remember that we are in the presence of the King of Kings.