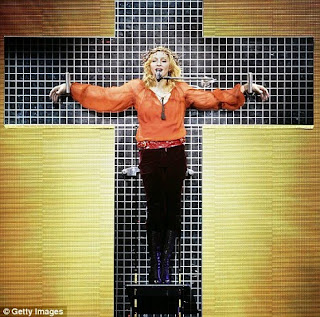 Posted on DirectionsToOrthodoxy.org / Wed Aug 26 2009 AFP
SOFIA — Bulgaria's Orthodox Church condemned on Tuesday Madonna's upcoming Sticky and Sweet concert in Sofia, say-ing it blasphemously collides with the date that marks the be-heading of John the Baptist.
"We express our Christian support and approval for the art of singing, which influences the moral development of people and promotes universal moral values," the church said in a statement.
But it added that at almost every concert she stages in a Chris-tian country, Madonna -- who performs in the Bulgarian capi-tal on Saturday -- has shown a "lack of respect" for church rituals.
"In some of her choreography and stage scenarios, this singer sends impressive messages which, however, run contrary to Christian morality," the statement said.
What's more, the church said, August 29 is a day of lent for Orthodox Christians marking the beheading of John the Bap-tist, the biblical preacher who baptized Jesus Christ and an important figure in the Orthodox faith.
Almost all tickets for Madonna's concert, one of the largest gigs ever organized in Sofia, have already been sold, organiz-ers told AFP Tuesday, although they refused to give a precise number.
Fans are feverishly awaiting the show, which also falls on the day that late pop idol Michael Jackson would have turned 51.

From Wikipedia.org
Madonna joined the Jewish mystic religion Kabbalah in 1994. Her immersion in Kabbalah caused a furor and she faced opposition from Rabbis who called Madonna's joining the religion as sacri-legious and a case of celebrity dilettanism. Madonna defended her Kabbalah studies by stating it "would be less controversial if I joined the Nazi Party" and that the Kabbalah is "not hurting any-body." The religion went on to influence Madonna's music, espe-cially albums like Ray of Light & Music as well as her world tours.
Posted by MamaBirdEmma at 4:32 PM

We had hoped that she would have grown wiser with age.

Apron of the Month Club said...

Our children need a better role model, and in my house it starts with being a good Christian parent.

Blessing to you.
Yoli Kalkofen
http://apronofthemonthclub.blogspot.com/