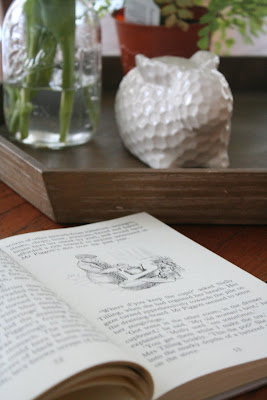 Two hours later Nelly sat, blown but triumphant, on the kitchen chair and surveyed her handiwork.

She had a cause for pride. A bright fire glowed behind gleaming bars, and the bacon pie was already in the oven beside it and beginning to smell most savory. The thin little cat, her repast spread on a newspaper in the corner, dug her sharp white teeth into the cod's head, closing her eyes in bliss the while.

The floor, the walls and the wooden table had all been lustily scrubbed. Albert's dingy sink had been scoured to its original yellow colour, and the window above it gleamed and winked with unaccustomed cleanliness.

Taking a steady look at it, thought Nelly to herself, easing off her shoes for greater comfort, it wasn't such a bad little house, and certainly very much more conveniently placed for shopping than her own cottage at Lulling Woods...

Of better still, there was the village school practically next door! The thought of those yards of bare floorboards, pounded day in and day out by scores of muddy boots, fairly crying out for a bucket of hot suds and a good brush, filled Nelly's heart with joy. There was a cloakroom too, if she remembered rightly, with a nice rosy brick floor that really paid for doing. And there was something about a large tortoise stove, freshly done with first-class blacklead and plenty of elbow-grease, that gladdened your eyes. She had heard that Miss Watson wasn't best pleased with he present cleaner. A word dropped in the right ear, Nelly told herself, might bring her the job if she decided to earn an honest penny in Thrush Green."

I just love your blog. I love the pictures and I love the sweetness and gentleness it emulates.

Forgive me, a sinner.

A vivid description that makes the scene so easy to visualise. Thankyou for posting.
[Valerie]

As God forgives, I forgive, B. Joanna!

Thank you Nancy and Valerie!