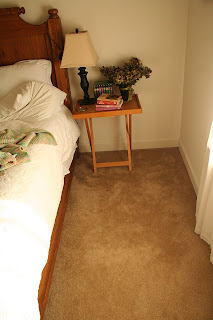 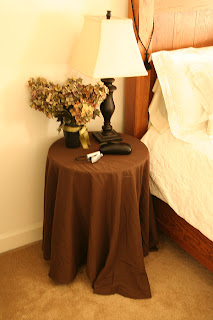 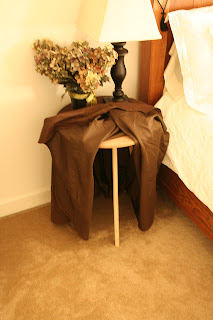 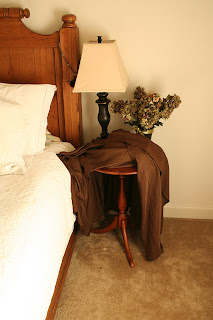 We have used the tv trays instead of nightstands for over a year now and I thought they looked okay until I saw them in some pictures I took. They looked so cheap when compared with our beautiful Broyhill bed. Since getting $250 nightstands (each!) is not in our future for quite some time (i.e. years!), I started to look for alternatives. I remembered that I had a round decorator's table (about $6 at Walmart) stored away and a pretty (a shame to cover it, really!) round side table that was nearly the same size. We also had two brown table cloths that fit the table in storage ($10 each at Walmart). I quickly switched in the round tables and cloths for the tv trays and was really impressed by how easily it improved our bedroom! I'm sure that some of the more frugal mama's out there could have done it cheaper, but my husband was impressed that I used what we had already spent money on to fix things up!
Posted by MamaBirdEmma at 5:02 AM

Email ThisBlogThis!Share to TwitterShare to FacebookShare to Pinterest
Labels: Homemaking

That looks very nice and is a great solution. Good job using what you already have!

One idea - I'm not sure it will work for you with your little ones - I have stuck a basket or crate under my tables like that to store things I don't often need. You can't see it at all, yet it's easy to access.

That looks REALLY good! Way to go! Being newly marrieds and all, we're trying to figure out bedroom furniture, sharing, all that. :) So far we have one tv tray on my side of the bed. I would like to have two bedside tables without spending much money. Maybe I'll have to try this. Kelly

I think that looks really lovely.

My Dh is a woodworker, and he made my nightstand, I like looking at it as I fall asleep.

you have such a lovely home...
Btw I really love your blog! so inspiring!
Yunie Lou

The round tables are pretty. I am currently using the same solution in our master bedroom. I have two round tables covered with white cloths. I am debating about switching them out with some sturdier end tables from my parents' home that are no longer needed. But, I'm not sure they'll fit the decorating scheme. Decisions. Decisions. LOL. Happy week away.

Oh, that is a wonderful solution..but are your children aware of the danger of let the table fall over? Overhere (four children) we used an old telephone table that my moms friend gave me. DH painted it white after using it a year of 8 and now it looks like new again!