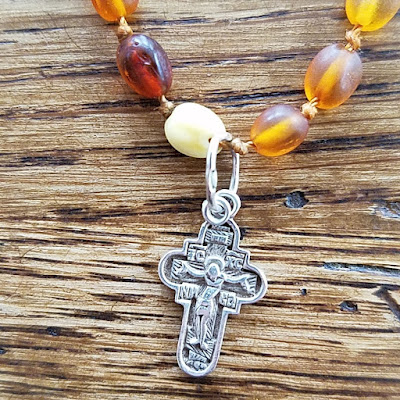 It has been quite a week.

On Monday afternoon, a man broke into our church.  He pushed through the front doors of the church, breaking the lock on the door.  He ripped one of the Royal Doors off the hinge, and fumbled around in the Altar. Eventually, he knocked on the interior house door and Father John realized at once that something wasn't right with him.  Somehow, Father John had the presence of mind to have the intruder fill out a visitors card after speaking with him for about 15 minutes.  The man revealed that he believes that he is the Messiah and also called himself the Son of Man. Eventually, he left the church, and after playing basketball in the church parking lot for a few minutes, got in his car and left.  Father John called 911 and State Troopers caught up with the guy and came to take Father's statement.  Thank God everyone is okay!  We are hopeful that this man will get the help that he needs!

Then, tonight, our middle son had a basketball game.  In the last few minutes of the game, he was asked to remove his cross by the head of his basketball league.  He refused, saying that he could not for religious reasons, so she benched him for the remainder of the game.  Fortunately, my husband was the parent who brought him to the game and was able to discuss this with the coach, refs, and the head of the league.  They refused to allow our son this religious accommodation (wearing a breakaway chain to prevent injury to anyone playing), so my husband is handling it with the head of the park and recreation for our town.  We'll see what they decide.

Here's hoping for a peaceful and quiet remainder of the week!
Posted by MamaBirdEmma at 9:12 PM

OH my goodness! Thank God nobody was hurt. That is really frightening.

Thank heavens no one was hurt!

Good for your son for standing firm at his age. We might as well all be prepared for this kind of thing to become commonplace, sadly. Our children must learn to defend their faith from an early age.

(My reader hadn’t updated your blog since February 2nd so I haven’t seen any posts since then! I had to unfollow and refollow to see them.)

Out My window said...

Scary, I always worry about shootings at churches, especially in religions that really require a sacrifice to live. It is almost like some one has to be packing all the time. I hope there will be a good reconciliation for your son. It is very hard to try and live ones religion these days. I am sorry but we just stick out and that is sad.

That is so scary. I am glad everyone is ok.

I am shocked and at the same time not shocked for your son. Hopefully it gets resolved, but what a strong guy when faced with that decision.

That is terrifying...I'm so glad your family is safe and that no one was hurt. I also hope that you are able to repair your gorgeous church without any difficulty. I'm really dismayed about how the coach is handling the removal of your son's cross. I hope that Father can work something out with them...I'm very proud of your boy for standing up for his faith!

we are praying! We sure live in difficult times. But we don't chose when we live but how we live when we do; so glad your son stood firm. Lord have mercy on us all! Sending our continued love, prayers...

You have to be very proud your son stood firm. It is the times we live in. Glad everyone is okay. Enjoy your blog!

Oh I am so very sorry you have had such a rough week!

Could your son wear his cross on a pin instead? Necklaces/chains can be dangerous. It sounds like a safety issue and not a discriminatory issue. Good for your son for standing up for himself though.