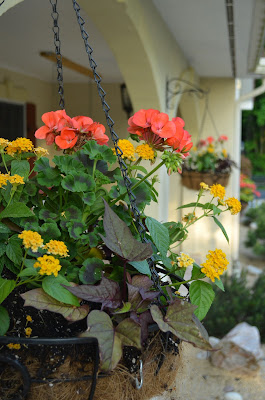 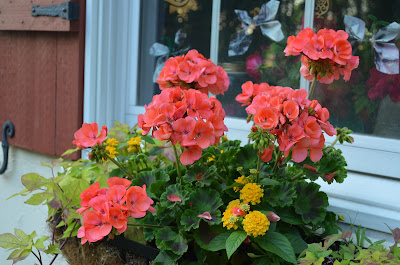 During Holy Week, we filled the window boxes in the front of the house with salmon colored geraniums, lantana, and sweet potato vines.  I like them so much more than what we did last year!  So far, it seems that everything is blooming well and flourishing (we'll see how everything looks when the heat really sets in though!).  I've been watering just about every other day at varying times.  I plan on really getting into the routine of watering in the early morning while the children play in the yard.  It's nice to have something to putter around with when the little ones do their thing, and I suspect that knitting won't been too nice in the heat!
Posted by MamaBirdEmma at 9:52 PM

Email ThisBlogThis!Share to TwitterShare to FacebookShare to Pinterest
Labels: Outdoors

Custom Boxes Zone is the top best company in the USA.Cardboard boxes are industrially prefabricated boxes, primarily used for Lip Balm Boxes goods and materials and can also be recycled. Specialists in industry seldom use the term cardboard because it does not denote a specific material.please visit the Custom Boxes zone in the USA.

Sleeve Boxes with a logo made custom shapes, favored sizes, and special formats. We utilize the best quality cardboard and recyclable Kraft material for the assembling of these boxes. Uniquely printed sleeves with a plate and without plate are available at iCustomBoxes at wholesale costs.
Custom Boxes
Paper box printing
bath bomb packaging

Lip Balm Boxes are uncommon endowments so their packaging ought to likewise be novel and imaginative.Lip Balm Boxes display boxes are a perfect method to pack yournLip Balm Boxes.

Your article has really good reading, thought-provoking information. You make several sound points I find agreeable. Your article is a good example of superior writing from a writer that cares. Thanks for sharing this information. Custom Window Boxes

Thanks for Sharing this article, I really impress your work. you can get them with printed and wholesale options which further make them the most suitable packaging.
Paper Cigarette Boxes,
Packaging for Bath Bombs
burger boxes
french fries boxes,

We GoToBoxes are qualified experts and specialists in making any out of the holder plan for your Custom Boxes PAckaging. Quality packaging forever represents a major role to create a product individual amongst different results. Print the touching concepts on the Lip Gloss Boxes to get the customer's request. Have impressive and expensive lip gloss boxes to produce lip gloss products which make a different report between you and competitor businesses.
Lip Gloss Boxes
Pen Boxes
French Fry Boxes
Bath Bomb Packaging
Pre Roll Packaging

I'm very Glad to visit your informational Post. Custom Lip Balm Boxes Packaging boxes are really necessary for any kind of product. If you want to pack your products in a stylish way then use these Custom Lip Balm Boxes with customized designs, styles, colors, shapes, and stocks. We are also offering error-free design and free shipping services all over the USA.