The blueberry farm opened its U-Pick fields today, so we made it a Blueberry Day! It was our first time to ever go picking and it was so much fun I know that it will become an annual event!

We started off the day with homemade blueberry pancakes and headed out to Blueberry Lane to pick at about 10:30. 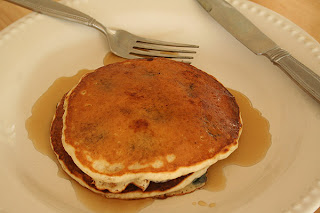 The bushes were loaded with berries and we spent about 45 minutes picking. Our morning ended with tears when Sugar Plum was frightened by a dinosaur in the grass (known more commonly as a snake!). Fortunately, we had a half full bucket which was more than enough for us right now (though we may go back). 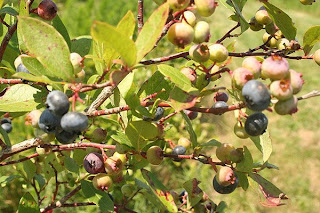 Little Man was filthy! I didn't think that he could get dirtier than he was when we picked strawberries, but he did! 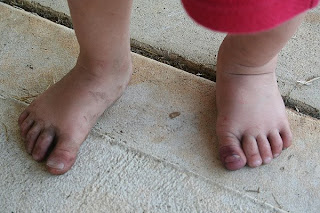 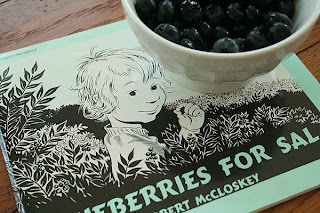 Our last activity for the day was to make the simplest blueberry topping for ice cream from Martha Stewart. It is so delicious and tastes a lot like blueberry cobbler since it is made from butter, sugar, and blueberries (As Ina says, "How bad could that be?"). 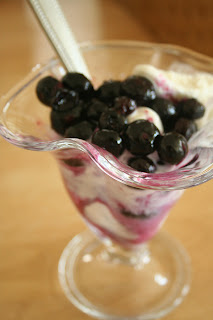 Do you pick blueberries in your neck of the woods?
Posted by MamaBirdEmma at 7:50 PM

At Blueberry Lane - I had been watching the Wave for the opening knowing it had to be soon but must of missed it! Tomorrow might be blueberry day for us !

Your day sounds wonderful. You are making very special memories for your little ones! I love blueberries, alas, they don't seem to grow naturally in Utah. Not that I know of, anyway. I do pick cherries and they are free ones at a neighbor's house, which hang over the fence and are free for the picking. :)

When you have a free moment, stop by my blog. I uploaded the first of my pictures from my vacation back home in the South. The flowers are so lovely.

Blueberries are ready yet around here-- it's still strawberry season! We will definitely be going, though. Both the boys will be able to pick, I suspect. It looks like a wonderful day!

Ooooh. I will have to look on the internet to see if any are around here. I assume there are, but just have to find them. I would LOVE to take the kids to something like that!

Blueberries are my absolute favorite, but they are a late summer treat here (my birthday is the last of August, and usually I have fresh ones for the day)

That looks like so much fun!! The picture of your baby's feet are so adorable! Hope the blueberry stains came out.... :)

We picked a couple of weeks ago, I have a couple of gallon bags of them in the freezeer... a yummy treat for something sweet and cold on a hot day.
I do need to make some jam w/ some of them though before they all get eaten

I love Blueberries for Sal. I have always wished I could have a kitchen like the one pictured on the first and last pages. No blueberries here in Sutter County, CA, they don't like 110 degree weather!