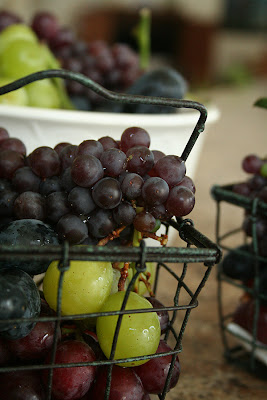 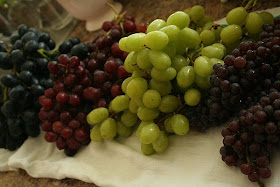 Books
The Transfiguration of Our Lord
God shows Who Jesus Is (The Children's Bible Reader, Pages 218 - 219)

Activities
Take a trip to the market to purchase grapes (and even other fruits) to be blessed after Liturgy. Purchase as many different varieties of grapes as you can (last year we found Green, Red, Champagne, and Midnight Beauty - all seedless) and have the children wash them and arrange them in a basket. If you have enough baskets for each child, allow them to bring their own basket of grapes to church.

Wear white to Liturgy. If you don't have an entire white outfit (we don't!), don a white sweater, shirt, or even a hair bow!

Sing the Troparion of the Feast for the prayer before meals.

Display the Transfiguration Icon on your feastday shelf or table. If you don't have one, print a coloring page and color it in!

Serve a special meal. Feature the grapes and other fruits that were blessed at Liturgy. Use your best linens and dishes. Have the children create a special centerpiece.

If possible, do something special together: go to the park, take a trip to the beach, go as a family to the playground, rent a family movie, etc.

Talking with Children About the Feast of Transfiguration

The Orthodox Church celebrates many special feast days throughout the year. One of the very special ones falls on August 6/19 and is called the Transfiguration of Our Lord. "Transfiguration" is a long word that tells us about something wonderful but hard to understand. To be transfigured means to be changed or glorified; on this day when Jesus was transfigured He showed Himself as God to three of His friends. How did He do that? He let them see Him changed, shining with light. After a little while He looked the same as before, but they still understood better Who He was. What a beautiful day that was!

On that day Jesus wanted to go up on a mountain to pray. It was called Mount Tabor. Jesus had 12 disciples, but He only chose three to go with Him: Peter, James and John. Why do you suppose that He didn't take all of His disciples with Him? Maybe Jesus didn't think that Judas should see Him in His divine glory, because Judas later was going to go to the people who wanted to kill Jesus and ask for money to show them where Jesus was. All the same, Jesus loved Judas and didn't want to leave him alone at the bottom of the mountain, so He left some of the other disciples to stay behind with him.

Have you ever climbed a mountain? Peter, John and James had a long climb as they went up the mountain with Jesus. They must have been tired! But with Jesus leading the way maybe they were so excited that they didn't even notice. What do you suppose they were thinking as they climbed higher and higher? They must have known something really special was going to happen!

They were all dusty when they got to the top, but they didn't care. Jesus began to pray. As He prayed, the way He looked changed. The disciples could hardly believe their eyes! The face and clothes of Jesus shone brighter than the sun. Have you ever looked up at the sun? You know how hard it is to look at the sun when it is shining; you have to quickly look away or your eyes will hurt. Jesus was even brighter than this. Maybe you wonder how this could possibly be? Because Jesus is God, He wasn't just FILLED with light, He IS Light! The disciples had to cover their eyes. Some icons even show them falling over and losing their sandals because they were so surprised at what they saw.

That was not all that happened. When they opened their eyes a little, Peter, James and John saw two holy men were talking with Jesus. They recognized Moses and Elijah and hardly knew what to think: Moses had been dead for a very long, time and Elijah had been taken up to heaven in a fiery chariot. What were they doing there on the mountain? The Gospels tell us that they were talking to Jesus about His death, which would bring all men the salvation they needed. Peter was so happy he didn't know what to say. He just knew he wanted to stay right where he was with Jesus, Moses and Elijah. So he said, "Let's make three little houses here..." But as he said this a big cloud came and covered them all. The disciples couldn't see anything and were afraid. They didn't know what was happening. Then they heard a voice coming out of the cloud, saying, "This is my beloved Son in Whom I am well pleased; listen to Him." The cloud disappeared and Jesus was alone.

So much happened that day; on the way down the mountain, the disciples must have been very quiet. What they saw was so special, Jesus told them not to tell anyone about it until after He rose from the dead. Were you ever asked to keep a secret? This was a very beautiful secret!